This is the first in what we hope to be a series of posts where we talk about the apps, hardware, and other stuff we like and use around the the office at Binary Formations.

There is nothing more satisfying for me as a developer than coming up with a unique take on something that’s been done countless times before. It’s a hard thing to do and something at which I’ve had far more failures than successes. So it should come as no surprise that I feel a sense of professional admiration (and maybe a little envy) when I run across an app that puts an innovative twist on a common task. Such is the case with Gestimer, a short-term reminder app for the Mac.

I bought Gestimer (which I assume is a mashup of gesture and timer) after reading a couple of tweets raving about its user interface. At only $2.99 (US), I figured it was worth it just to see for myself what people were talking about. I wasn’t disappointed.

Gestimer is not a to-do list app. Nor does it help you to remember to pickup the dry-cleaning next Tuesday. It doesn’t sync across all your devices either. And that’s just fine, because what Gestimer does do, it does very well: set little reminders on the fly for things you need to worry about later on in your day (think a few minutes to a few hours in the future, rather than days or weeks).

Gestimer runs in the menu bar, so it’s out of the way, yet easily accessible. To set a reminder, you click and drag away from its icon in the menu bar. The time at which the reminder will appear increases the further you drag. 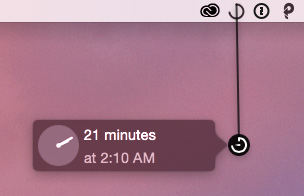 When you’ve reached the desired time, simply let off the mouse button and the icon snaps back to it’s place on the menu bar like a rubber band. For the easily amused, like myself, this alone is worth the price. Once the icon snaps back, Gestimer pops up a little window where you can enter a description for your reminder. 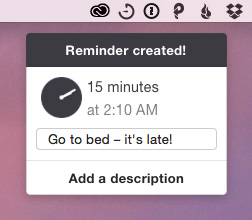 Once the specified time has elapsed, a notification appears with your reminder (you can set as many reminders as you like, by the way). It’s quick, super simple, and the interface is an absolute delight to use.

While it might be easy to dismiss Gestimer as a gimmick, it’s unique UI and narrow focus are exactly why this app has become more than a mere curiosity and is instead something I use regularly throughout my workday. Writing software requires large blocks of uninterrupted time, but the realities of running a business and everyday life mean things are always popping up that I have to be deal with a some point during the day.

I used to use Reminders to help me keep up with such tasks, but the break in concentration to launch (or switch to) the app, enter the reminder, and then configure the alert was longer than liked. Plus, when a Reminders alert goes off, it goes off on every Mac and iOS device I have signed in with my Apple Id. As you might imagine, as a Mac and iOS developer, I have a lot of devices hanging around, which in turn means a lot of alerts going off at the same time. And yes, it’s incredibly annoying.

With Gestimer, I can quickly drag from its icon to the approximate time I want to be reminded of something, type in a quick note, and then get back to what I was doing with only a minimal break in concentration. The notification only appears my development machine, which is where I spend all my time working anyway.

Gestimer has a simple purpose and it does it very, very well. It would be nice to have a snooze button on the notification to tell it to remind you again a bit later, but that’s a minor quibble.

Gestimer costs $2.99 (US) and is available on the Mac App Store. Do yourself a favor and go get this app. You’ll be glad you did.